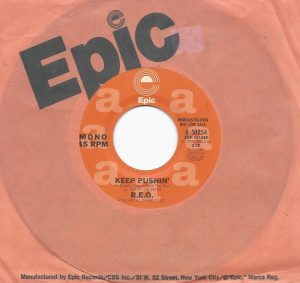 Kevin Cronin; Frontman of the Classic Rock band REO Speedwagon wrote the tune. It speaks volumes for anyone, anytime, across any situation. The whole jam speaks about staying strong even when you feel weak. Although the song is about a relationship – the message can be attached to anything we do in life… or life itself! The voiceover biz is TOUGH! In my opinion, what makes it tough isn’t the work per se, it’s just a LOT of things to juggle. Not only are we Actors, but on-going learning and coaching is also a huge task. Finding clients and building a relationship with them is also part of the gig. Lucky for me, I’m a people person, and it comes naturally. For some, it doesn’t come so naturally. Learning about marketing, social media, CRM’s, Invoicing, Website SEO, etc etc.. It doesn’t end.. and for those that get overwhelmed with all of this – the message is… Keep Pushin’! Hard work, pays off!

You’ve seen those before and after photos of people that work out and 8 months later look like a different person right? The person really doesn’t see what everyone else does – until it’s presented in a comparison type of photo. This analogy applies to any goal or path that you’ve been working on the amount of courage to get started in the first place, and where you are now. Run your own race, and at your own speed. There’s no reason to race to the top because that doesn’t exist. Not in voiceover. Read, Study, Learn, and Grow. it takes time, but anything that’s worth having takes time. Mastering patience is hard – but reminding yourself that anything of great value takes diligence and consistency, is the key. Sometimes reminding yourself daily of this works best. Whatever works, do it!

From seasoned voiceover actors to the newbies, and ones in the middle – we all face rejection of not getting that great paying gig – and not even knowing why other than assuming it just wasn’t the voice they were looking for. We all have friends and families that we want to spend time with instead of marketing, or creating social media posts, or auditioning for that $100 gig that you’ve talked yourself into believing “eh -it’s just $100 someone else will probably get it anyway” – HEY.. stop.. because that $100 audition that you might not get the job for, could be shelved, and you could get an email on a random workday asking you to do another job that they have – oh, and this one pays $600. In the words of Kevin and his millions of fans all over the world KEEP PUSHIN’ ON!